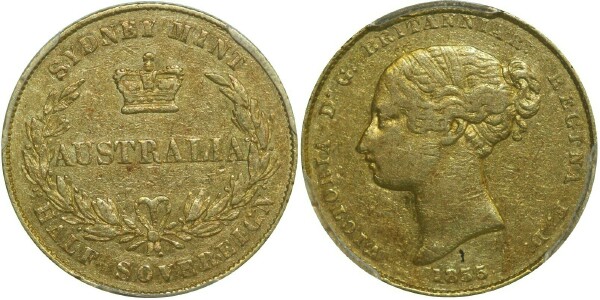 The first business strike half sovereigns struck at the Sydney Mint were dated 1855 and 1856. Rather than using copper to harden the metal as the Royal Mint did, the Sydney Mint used silver. The reverse design featured a banksia wreath tied into a bow surrounding the word AUSTRALIA; these are positioned below a crown with the legend SYDNEY MINT and HALF SOVEREIGN encircling the entire design. This design was short-lived with the Sydney Mint reverting to the imperial shield design in 1871.

The first two years featured the filleted bust of Queen Victoria designed by James Wyon and is known as the Type I design. This design was replaced in 1857 by the wreathed bust of Queen Victoria or Type II design, designed by cousin Leonard Charles Wyon, son of William Wyon, engraver of the standard Young Head bust used since 1839. Patterns of the L.C. Wyon design were struck dated 1855 and 1856 with the 1855 dies used for business strikes, most likely in 1857 prior to being overdated to 1857.

Excluding varieties, overdates and the exceedingly rare 1855 Type II, the key date of the series is undoubtedly the 1855. The 1855 dated Type I half sovereign is very rare being survived by approximately 55 to 60 examples. The 1860 is also rare with an estimated 200 to 250 surviving examples.

The Sydney mint series is marked by low survival rates, likely due to the gold-silver alloy giving them a higher intrinsic value than their face value making it profitable to melt them down for their metal content. This gold-silver alloy continued for the entire series despite official protests to the Colonial Treasurer by Sydney based chemist Charles Watt with the Mint Master arguing that the extra value from the silver content was a decided advantage.

Out of the Type I series, only the 1856 can be readily acquired with lower grade examples being reasonably common and higher grade examples having survived through the Indian hoard. Survival rates of the 1855 are higher than the rest of the series at about 1 in 400 due to being a known rarity for much of its existence. This has meant that examples have survived regardless of condition thus leading to a higher proportion of problematic examples surviving when compared to the rest of the series which saw problem coins melted over the years. Despite the higher survival rate, the tiny mintage of just 21,000 has meant that the survival count is nonetheless very low.

Some 1856 half sovereigns were struck from a reworked 1855 die and can be identified by sharp corners on the 6 consistent with the 5 punch a tiny dot after the date as per figure . Although the dot's location matches that of the 1855's dot, it is typically smaller due to die wear and it is entirely possible that the dot may have been filled or worn away prior to the retirement of the die. Further research is required to determine if 1856/5 overdates exist without the dot. 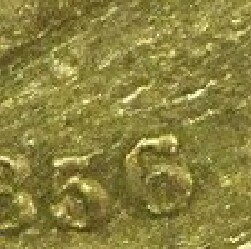 In addition to these, some 1856 half sovereigns were struck with a simpler reverse made from a reworked pattern die. The positioning and count of the berries are different along with the general shape of the design and a number of other minor features. These can easily be identified by a missing berry above L of HALF on the reverse and only 1 berry before the H of HALF like in figure compared with the standard reverse in figure . 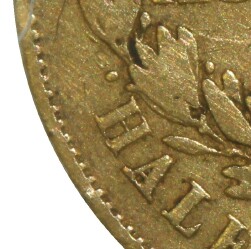 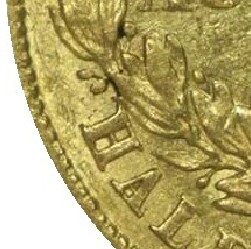 In addition to the 1855 and 1856 issues, four pairs of 1853 dated pieces were struck at the Royal mint London in order to seek approval for the colony’s Sydney mint design. Three of these pairs now exist in museums with the last in private hands.