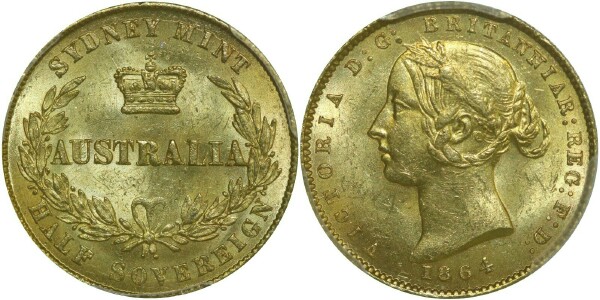 The Type II series was introduced in 1857 but as with most of the early Sydney mint issues, demand exceeded that which the mint could produce and due to the slow and expensive method for ordering replacement dies from London, the mint engaged in many improvised techniques for extending the life of the dies.

Due to the low pressure needed to strike gold coins, dies were more likely to wear out than crack and consequently the Sydney mint instead re-punched letters into the dies in order to extend their working life. This has resulted in a number of issues having re-punched letters, sometimes using the incorrect letter in place for example with the 1858 REG as RFG or SOVEREIGN as SOVRREIGN errors.

In addition to re-punching letters, dates were also overdated in order to continue using the obverse dies beyond their original date. The first overdated piece of the Wreathed Bust series was in 1857 when the 1855 pattern die bearing the L.C. Wyon bust of Queen Victoria was repunched with a 7 over the final digit in the date to produce a new 1857 die. These can be identified by the loop of the 5 protruding one of the right hand side of the base of the 7 as in figure .

In addition to these overdates, a very small number of 1855 half sovereigns with the L.C. Lyon obverse are known to exist and considering the very low survival rates of the era, it should be considered no small feat for any to survive unless they were struck in higher quantities, probably around the 1000 mark. These were most likely struck in 1857 prior to the overdating of the die. That being said, due to the low survival rates only three have survived, of which only two are in private hands and the other residing in the Museum of Victoria. These should not be confused with the 1855 Type II pattern which although struck from the same obverse die, was struck to proof quality with a cameo finish.

Despite the high mintage of the 1857 of 537,000, the low survival rate has meant a probable survival count fewer than 2,000 pieces. With the date having been possible to source through bullion lots up until the late 1990s, very low grade or problem examples were often melted and thus the grades of the surviving examples tends towards a bell curve with the peak at around the VG to Fine level.

The 1858 is probably the most common date in the series, continuing to service the high demand to monetise gold from the early gold rush dates and to produce a circulating high denomination coin for the colony. Like the 1857, the Sydney mint ran into problems with the working life of dies and consequently resorted to re-punching digits onto the dies. While most of these just resulting in the doubling of letters, there are two known examples of where the wrong letter was punched into the die; the first and most well known is the SOVRREIGN error. In this error, the first E of SOVEREIGN on the reverse was re-punched on the die with the letter R by mistake as in figure . Very few examples were struck with this error and even fewer had survived as the die was subsequently re-punched with the correct letter E. Having been discovered relatively early in Australian collecting history by the late Barry Sparkes in year 1994 (confirm), the error has become very popular and is now highly sought after. 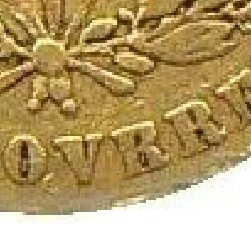 A more recently discovered error, the REG as RFG error which saw the E of REG re-punched with an F instead of an E as in figure , does not attract as much demand due to a lack of awareness resulting from its only recent discovery. It is nonetheless scarce though just how scarce they are remains to be seen.

The 1859 half sovereign exists as both a standard issue and an 1859/8 overdate. Both the year and its overdate seem to turn up far less frequently than the mintage implies, particularly in higher grades and some strike weakness is common to the year. The overdate is scarce though a lack of awareness of the issue may indicate many more unidentified examples exist. The issue can be identified by the bottom right-hand corner of the 8 bulging out of the 9 as in figure . 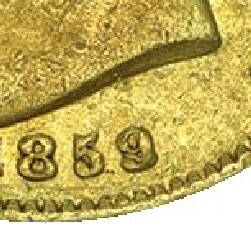